Logan's found another one, long too!

In related news, my eleven-year-old informed me this morning that we'll be seeing this film on the imax, his treat :)

Here are some new clips from the forthcoming movie that were posted over at Cimorra, my favorite German-language old-school gaming blog.


Warhoons taking orders from an effete, arrogant Thern (who must have lost his wig)? You've got some 'splainin' to do, Stanton...

Apparently this is when, in the film version, John first realizes he is on Mars. This confirms my suspicion that John gets to Mars in some other fashion than how he does it in the book: basically reaching out with his mind at the moment of his "death" to his patron planet - the god of war, as he has always been a warrior, for many normal human lifetimes. I wonder if that pesky Thern is involved in this, too?

Kudos on the "many karads of empty space" line, as well as using the names "Jasoom" and "Barsoom".

I always liked Woola, and Carter's relationship with Woola. This is my favorite of the three clips; good stuff!


Is it me, or is Kitcsh channeling the voice and inflections of Blade Runner-era Harrison Ford?
Posted by Al at 6:05 AM 4 comments:

An avalanch of "authorized editions" 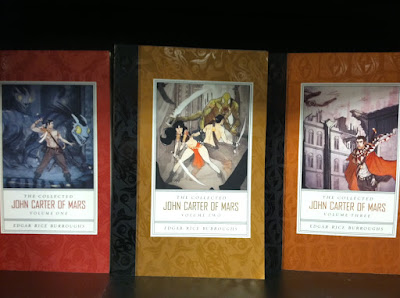 One of the side-effects of releasing a movie based on a book that is no longer copyrighted, is that apparently everyone and their mother has printed up a stack of their own "editions" of ERB's martian books. I noticed this while breezing through B&N yesterday. At least a dozen different editions.

The ones pictured above caught my eye, because if you look closely (clicking the image will make it bigger) at the ships in the sky on the third book from the left, you'll notice they are in the style of the forthcoming movies. A style of skyship I've never seen before. Peeking inside, these books are "Disney Endorsed" or something like that. So it makes me wonder if these covers are early concept art for the movie. I say early, because, short of the airships and Dejah's scimitar, nothing else looks like the movie previews. It kind of looks like Carter is wandering the bombed out ruins of WWII Berlin.
Posted by Al at 7:03 AM 1 comment: