If you needed another reason to see the new Harry Potter movie...

...other than your kids pestering you, that is.

Rumor has it that the trailer for John Carter will premier July 15th with this movie.

Oh, and apparently no yellow wigs for the Therns. That's an awful big part of their psyche (their debauched inferiority to their great ancestors, which they try to ignore) to omit. Can't say I'm happy about that - but I'm not sure why the Therns would be in the first movie to begin with? Maybe they've been filming all three movies at once?
Posted by Al at 12:54 PM 1 comment: 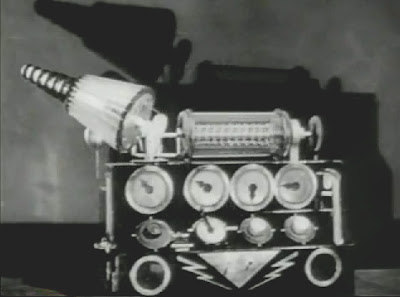 Named for Jason Gridley, its discoverer, the Gridley Wave has been the chief means of communication with other worlds in the Solar system since the late 1920's. Like the Martian 9th Ray, the Gridley Wave was not something that saw much interaction with the physical realm of our world, but the first tentative explorations of Pellucidar helped to further refine and define uses for the phenomenon. One of the most puzzling enigmas to scientists has been the obvious differences between the first hand reports of earthly explorers to Mars, Venus, and even our Moon, and what our standard technology of telescopes and radioscopes reveal.

As you can see from the marvelous pictures and data from the Mars rovers, as far as we can tell Mars is a barren, lifeless desert devoid of habitable temperatures or atmosphere. Yet the firsthand tales of explorers such as John Carter or Ulysses Paxton tells a different tale, of a world that is declining into ruin, but still a vibrant world full of life.

This has led leading physicists, astronomers, and mathematicians, Stephen Hawking being one notable proponent, to theorize that the Gridley Wave somehow penetrates a time-relativity barrier undetectable, and unpassable, by conventional technology. The possibility of such a barrier between worlds, one of time and not simply space, has opened new speculation about space travel, and a department has been funded, albeit modestly, in NASA to explore new options.

Now, nearly a century after its discovery, new technologies employing the Gridley Wave allow us to move past basic Morse Code, and actually transmit sound and images. Speculative consumerists predict immersive, three-dimensional technologies will begin to emerge within the next decade, allowing us to experience the wonders of Mars from the comfort of our own homes!
Posted by Al at 6:57 AM 1 comment: